Diabetes Study: The Effect of Sleeping on an Inclined Bed on Diabetic Individuals

According to several researchers, traditional horizontal sleeping has been shown to prevent the ability of the body's circulatory system to function at an optimum level; thus, this sleeping position causes restricted blood flow and the inability of the lymphatic system to flush out the toxins that accumulate in the many networks of vessels throughout the body. Inclined Bed Therapy (IBT) tends to solve this problem. Introduced by Andrew K. Fletcher, Inclined Bed Therapy (IBT) involves sleeping on a bed raised at the head between 4 and 8 inches using bricks, wedges or blocks. This utilizes the force of gravity to improve the circulation of the body while asleep and taking advantage of this by allowing body cells to heal and regenerate on their own.  Circulation is maintained and improved from changes  in all fluid densities in the lymphatic system due to gravity. For this,  reports from users around the world stated that Inclined Bed Therapy can be useful in disorders such as spinal cord injury, back pain, acid reflux or GERD, sinus and respiratory disorders, sleep apnea, poor circulation, blood pressure, multiple sclerosis and diabetes.  In this study, we examined the effect of this Inclined Bed Therapy on diabetic individuals whether it is effective in controlling blood sugar. We hypothesized that sleeping on an inclined bed eventually decreases blood sugar levels.

Initially, there were 13 individuals or volunteered participants registered of which 12 had been diagnosed by their health service provider to be diabetic and 1 was diagnosed as pre-diabetic. The method was very simple. Interview with participants was conducted and participants were evaluated and monitored while sleeping on an inclined bed raised initially at 4 inches head up position and 6 inches after four weeks. This was done with either 4 to 6 inches bricks or pairs of 2X4 wood blocks stacked together under the two legs of the bed at the head to resemble the inclined bed dimensions shown in the diagram and demonstration picture below.

Figure 1. Dimensions and angle of inclination for Inclined Bed as recommended by Andrew K. Fletcher

Figure 2. Practical demonstration of preparing a bed for use in Inclined Bed Therapy. 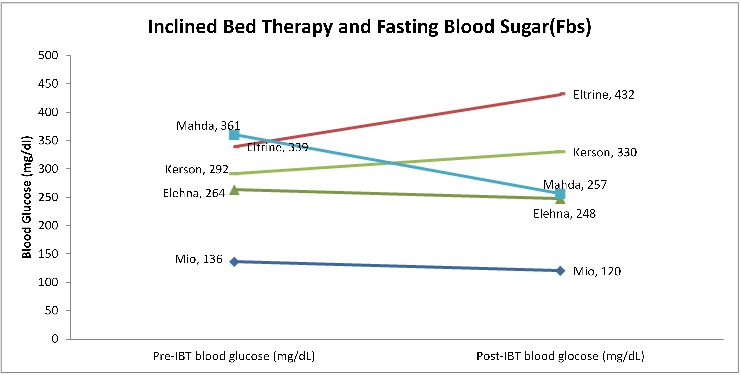 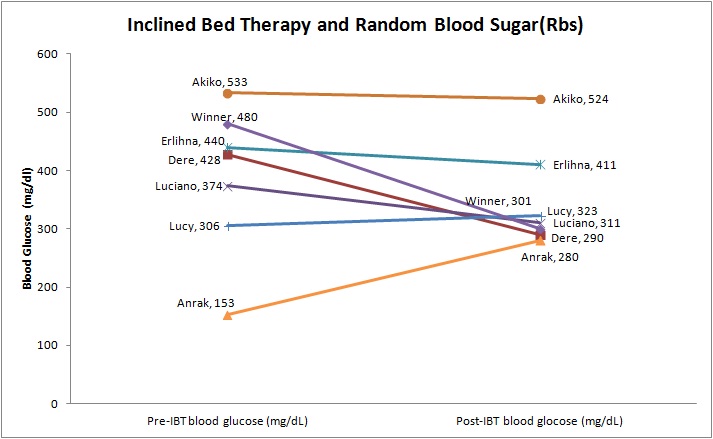 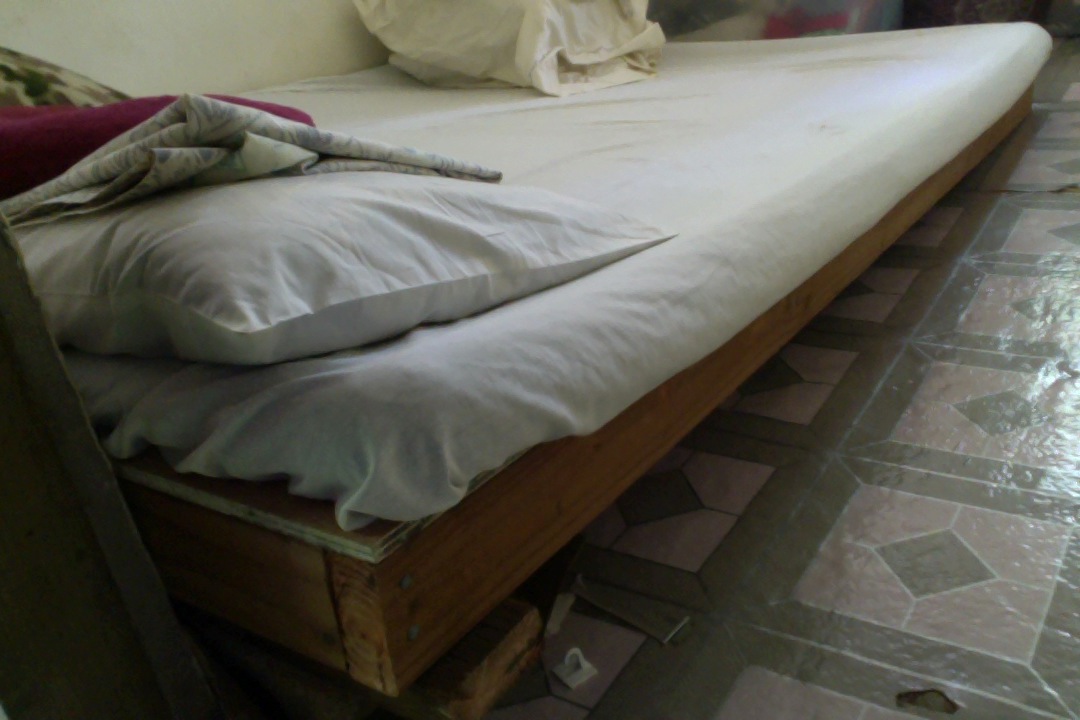 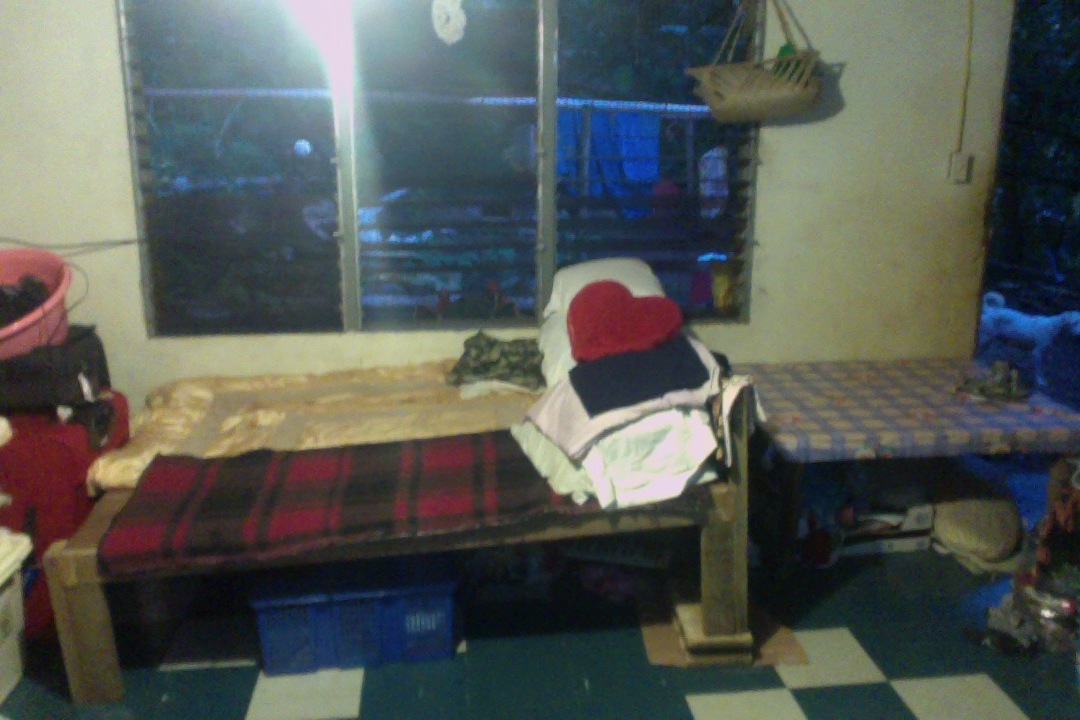 Photo 2. Wooden homemade bed raised at the head using a pair of 4” bricks to make an incline. Photo by Elehna (participant).

Investigating behind the elevated readings of both testing groups, Eltrine from the FBS group was off from using inclined bed for a few days by attending a home away prayer retreat which was followed by a one week church feasting activity. Kerson from the same group had to leave his home and stayed away for a few days to attend a family funeral. Funeral activities and ceremonies in Pohnpei involved participating in many food catering, meals and drinking of kava for almost a week. The two participants both admitted to have had anticipated and felt an elevation in their blood sugar levels from the activities.

Lucy from the RBS group was on  prescribed medication and had been missing on her doses a few days in a row during throughout the duration of the study. Anrak from the same RBS group was not on any medication but had not been watching much over what she ate. She mostly had oily and fatty meals.

All Participants listed other problems including: back pain, edema, difficulty sleeping, frequent night urination, snoring, morning light headedness and pain in joints. All participants claimed to have noticed improvement in all these problems.

The results have indicated that Inclined Bed Therapy may improve efficacy in reducing blood sugar levels only in attempted measures. However, further analysis and extended study should be required to validate this. Perhaps, one month was too early to provide us with final and most reliable conclusion.

Supported by College of Micronesia-FSM Public Health, Training Lab, Nursing Program and Dispensary. Special thanks to Andrew K. Fletcher for providing supporting information and advise and for Tetaake Yee Ting for assisting and mentoring during the study as well as Dr. Paul Dacanay for instrumental support and assistance in communicating deadlines