Introduction: Inclined Bed Therapy (IBT) is a therapy introduced by Andrew Fletcher. IBT involves sleeping on a bed raised at the head between 4 and 8 inches taking advantage of the benefits of gravitational force and utilize it to improve circulation of the body while asleep allowing body cells to heal and regenerate.
Objective or Hypothesis: We will examine whether IBT has a positive effect on diabetic individuals. We hypothesize that sleeping on an inclined bed eventually decreases blood sugar levels.
Methods: 13 participants registered of which 12 were diabetic and 1 was pre-diabetic. Participants were interviewed, evaluated and monitored while sleeping on a bed raised at the head initially at 4 inches for four weeks and then 6 inches thereafter. Blood glucose readings were taken from participants before using IBT and then once every week thereafter. Due to transportation limitations, Fasting Blood Sugar (FBS) readings were taken only from 5 individuals and Random Blood Sugar (RBS) readings were taken from the remaining 7.
Results: The expected outcome is the decrease in blood sugar levels from using IBT. 7 participants started using IBT for 1 week. From the 7 participants, 2 showed a decrease of 21% and 31% in FBS, 2 showed a decrease of 10% and 9.6% in RBS while 3 showed an increase of 23%, 7% and 31% in RBS.
Conclusion: 4 out of 7 participants who started already on IBT for 1 week, showed reductions in blood sugar levels. We expect that after 6 to 8 weeks we will able draw up final conclusion.

Inclined Bed Therapy (IBT) is a new therapy introduced by Andrew Fletcher who was inspired by the way in which trees are able to pump sap up to the tops of their branches. Fletcher theorizes that trees utilize the force of gravity to propel a kind of elevator that carries the sap up and down the trunks and through the branches (a structure that is very similar to the network of veins and arteries in human beings). For this reason, Fletcher has designed IBT to take advantage of the benefits of gravity while allowing individuals to rest in a position that is still comfortable to utilize the force of gravity to improve the circulation of the body while asleep. He discovered that raising the head of the bed between 4 and 8 inches can increase the gravitational force on the body while sleeping. This position will create the opportunity for the body to improve and maintain circulation without causing discomfort allowing the body cells to heal and regenerate. The benefits of IBT range from improvements in Parkinson’s disease, multiple sclerosis, cerebral palsy, spinal cord injury, short term memory loss, heart conditions, blood pressure, respiratory problems, psoriasis, thrombosis, varicose veins, gastric reflux and many others including diabetes.
In this paper, we will examine whether Inclined Bed Therapy (IBT) has a positive effect on diabetic individuals. We hypothesize that sleeping on an inclined bed eventually decreases blood sugar levels.

Initially, there were 13 individuals or volunteered participants registered of which 12 had been diagnosed by their health service provider to be diabetic and 1 was diagnosed as pre-diabetic. During the course of study, one participant decided to quit due to personal reasons bringing the number of participants down to 12. The method was very simple. Interview with participants was conducted and participants were evaluated and monitored while sleeping on an inclined bed raised initially at 4 inches head up position and 6 inches after several weeks. This was done with either 4 to 6 inches bricks or pairs of 2X4 wood blocks stacked together under the two legs of the bed at the head to resemble the inclined bed dimensions shown in Figure 1. Blood glucose in mg/dL were taken and measured before using IBT from individuals’ blood sample using ACCU-CHEK Aviva system and also after several weeks while using IBT. Due to accessibility and transportation limitations the 12 participants were grouped into Fasting Blood Sugar(FBS) where FBS readings were taken from 5 individuals and Random Blood Sugar(RBS) where RBS readings were taken from the remaining 7 individuals. Also due to delay in arrival of test equipments the test on participants was possible only for one month.

Investigating behind the elevated readings of both testing groups, Eltrine from the FBS group was off from using inclined bed for a few days by attending a home away prayer retreat which was followed by a one week church feasting activity. Kerson from the same group had to leave his home and stayed away for a few days to attend a family funeral. Funeral activities and ceremonies in Pohnpei involved participating in many food catering, meals and drinking of kava for almost a week. The two participants both admitted to have had anticipated and felt an elevation in their blood sugar levels from the activities. The two however, did not alter the lifestyle until the end of the study. Lucy from the RBS group was on prescribed medication and had been missing on her doses a few days in a row during throughout the duration of the study. Interestingly, her chart was incomplete for one week as she went on a week off-island business trip. Coming back from her trip a week later, her blood sugar was elevated. However, after resuming back on IBT her blood sugar went down after a week. Anrak from the same RBS group was not on any medication but had not been watching much over what she ate. She mostly had oily and fatty meals. She discontinued from the study after the third week as she needed to go for a surgery operation. There were a few other incomplete charts such as Deresia who discontinued for a week during her 7th week to attend a family funeral. Her blood sugar went back up after a week without IBT but was still below the initial reading. Winner from the RBS group and Mahda from the FBS group were couple. Their charts were incomplete during week 4 and week 6 due to their community church functions happening during those separate weeks. However, theirs readings were still both the initial readings taken before commencing on the IBT program.
The results indicated that Inclined Bed Therapy may improve efficacy in reducing blood sugar levels only in attempted measures. What this means is that it may help improve the effectiveness of any method to control blood sugar levels whether it is a prescribed medicine, herbal medicine or any other alternative ways to control blood sugar levels. It may not be effective in itself alone. However, further analysis and extended study should be required to validate this. Perhaps, 8 weeks was too early to provide us with final and most reliable conclusion. A more reliable duration of study may require at least
6 months.
Interestingly, all Participants listed other problems including: back pain, edema, difficulty sleeping, frequent night urination, snoring, morning light headedness and pain in joints. All participants claimed to have noticed improvement in all these problems.

To conclude, sleeping on an inclined bed seems to help efficacy in reducing blood sugar levels with those who were dedicated in controlling their blood sugar levels. Inclined Bed Therapy may not be effective alone. Just like any medicine and approach, to be successful in managing with diabetes, it is recommended that diabetic individuals need to incorporate sleeping on inclined beds with medication, taking some alternative remedies and changing lifestyles by eating a proper diet and doing enough exercise. 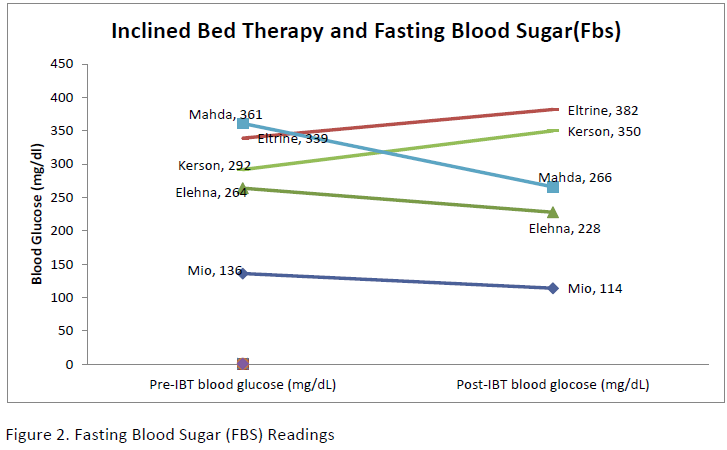 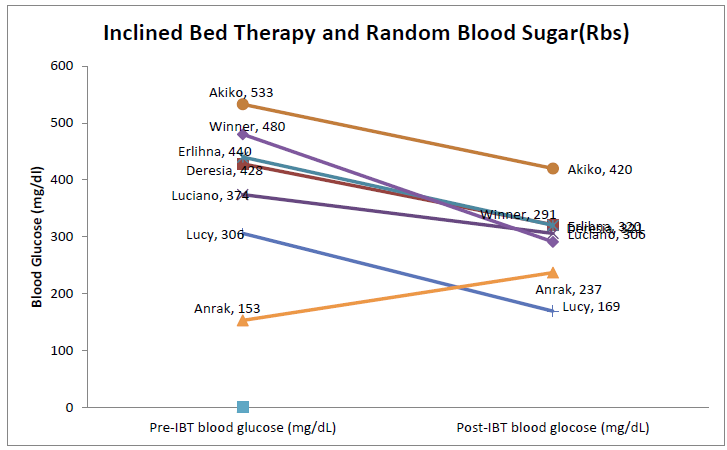