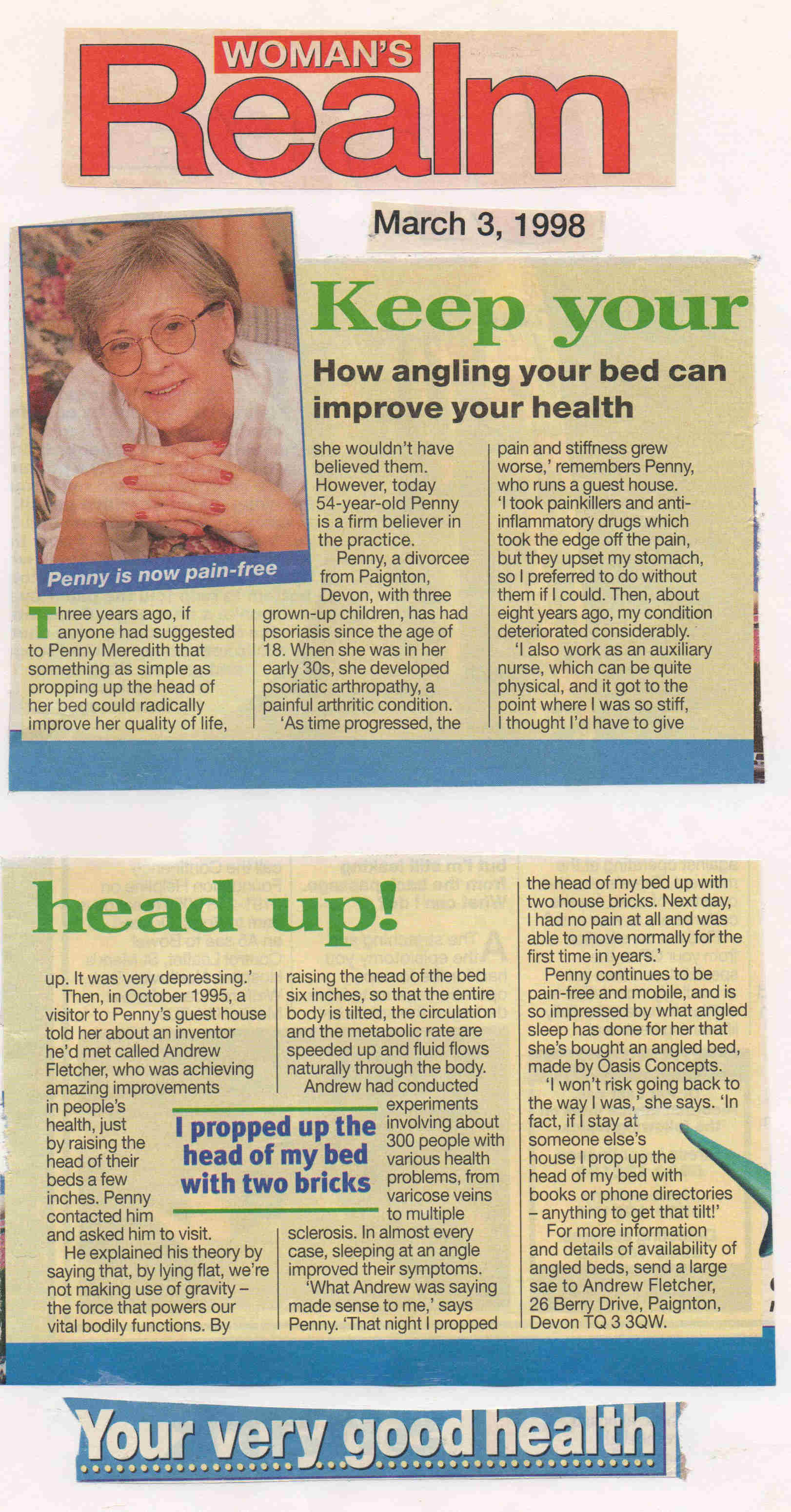 Keep Your Head Up
How angling your bed can improve your health
Three years ago, if anyone had suggested to Penny Meredith that something as simple as propping up the head of her bed could radically improve her quality of life, she wouldn't have believed them. However, today 54-year-old Penny is a firm believer in the practice. Penny, a divorcee from Paignton, Devon, with three grown-up children, has had psoriasis since the age of 18. When she was in her early 30s, she developed psoriatic arthropathy, a painful arthritic condition. 'As time progressed, the pain and stiffness grew worse,' remembers Penny, who runs a guest house. 'I took painkillers and anti-inflammatory drugs which took the edge off the pain, but they upset my stomach, so I preferred to do without them if I could. Then, about eight years ago, my condition deteriorated considerably.
'I also work as an auxiliary nurse, which can be quite physical, and it got to the point where I was so stiff, I thought I'd have to give up. It was very depressing.' Then, in October 1995, a visitor to Penny's guest house told her about an inventor he'd met called Andrew Fletcher, who was achieving amazing improvements in people's health, just by raising the head of their beds a few inches. Penny contacted him and asked him to visit.
He explained his theory by saying that, by lying flat, we're not making use of gravity -the force that powers our vital bodily functions. By raising the head of the bed six inches, so that the entire body is tilted, the circulation and the metabolic rate are speeded up and fluid flows naturally through the body. Andrew had conducted _____ experiments
involving about 300 people with various health problems, from varicose veins to multiple sclerosis. In almost every case, sleeping at an angle improved their symptoms.
'What Andrew was saying made sense to me,' says Penny. That night I propped the head of my bed up with two house bricks. Next day, I had no pain at all and was able to move normally for the first time in years.'
Penny continues to be pain-free and mobile, and is so impressed by what angled sleep has done for her that she's bought an angled bed, made by Oasis Concepts.
'I won't risk going back to the way I was,' she says. 'In fact, if I stay at someone else's house I prop up the head of my bed with books or phone directories - anything to get that tilt!'  Penny is now pain free.