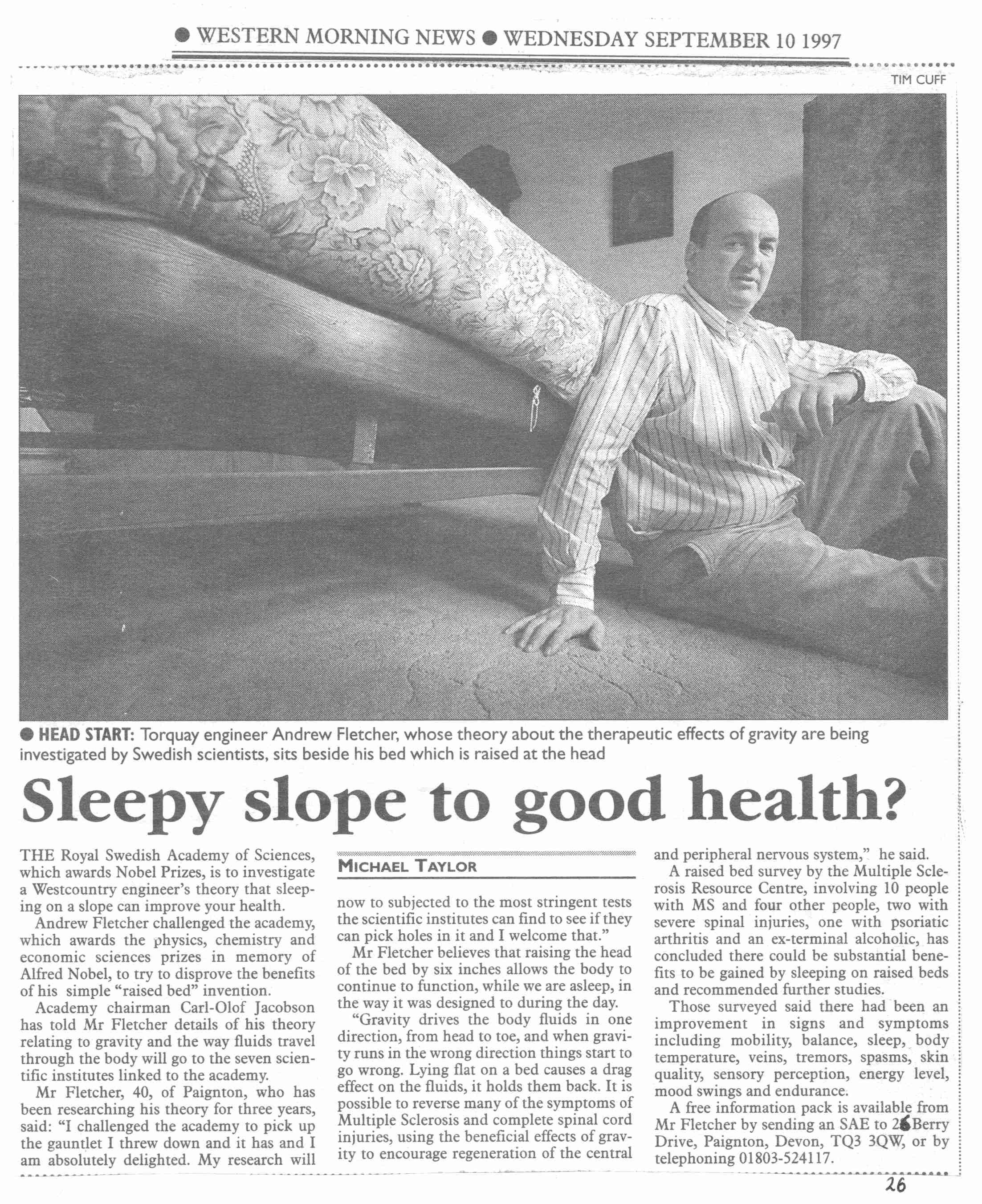 Sleepy slope to good health?
• HEAD START: Torquay engineer Andrew Fletcher, whose theory about the therapeutic effects of gravity are being investigated by Swedish scientists, sits beside his bed which is raised at the head
THE Royal Swedish Academy of Sciences, which awards Nobel Prizes, is to investigate a Westcountry engineer's theory that sleeping on a slope can improve your health.
Andrew Fletcher challenged the academy, which awards the physics, chemistry and economic sciences prizes in memory of Alfred Nobel, to try to disprove the benefits of his simple "raised bed" invention. Academy chairman Carl-Olof Jacobson has told Mr Fletcher details of his theory relating to gravity and the way fluids travel through the body will go to the seven scientific institutes linked to the academy. Mr Fletcher, 40, of Paignton, who has been researching his theory for three years, said: "I challenged the academy to pick up the gauntlet I threw down and it has and I am absolutely delighted. My research will now to subjected to the most stringent tests the scientific institutes can find to see if they can pick holes in it and I welcome that."
Mr Fletcher believes that raising the head of the bed by six inches allows the body to continue to function, while we are asleep, in the way it was designed to during the day. "Gravity drives the body fluids in one direction, from head to toe, and when gravity runs in the wrong direction things start to go wrong. Lying flat on a bed causes a drag effect on the fluids, it holds them back. It is possible to reverse many of the symptoms of Multiple Sclerosis and complete spinal cord injuries, using the beneficial effects of gravity to encourage regeneration of the central
and peripheral nervous system," he said. A raised bed survey by the Multiple Sclerosis Resource Centre, involving 10 people with MS and four other people, two with severe spinal injuries, one with psoriatic arthritis and an ex-terminal alcoholic, has concluded there could be substantial benefits to be gained by sleeping on raised beds and recommended further studies.
Those surveyed said there had been an improvement in signs and symptoms including mobility, balance, sleep, body temperature, veins, tremors, spasms, skin quality, sensory perception, energy level, mood swings and endurance.
by MICHAEL TAYLOR