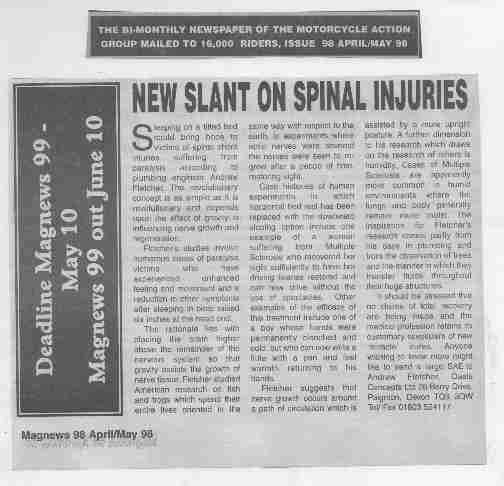 THE BI-MONTHLY NEWSPAPER OF THE MOTORCYCLE ACTION GROUP MAILED TO 16,000 RIDERS, ISSUE 98 APRIL/MAY 98
New Slant On Spinal Cord Injuries
Sleeping on a tilted bed could bring hope to victims of spinal chord injuries suffering from paralysis according to plumbing engineer Andrew Fletcher. The revolutionary concept is as simple as it is revolutionary and depends upon the effect of gravity in influencing nerve growth and regeneration.
Fletcher's studies involve numerous cases of paralysis victims who have experienced enhanced feeling and movement and a reduction in other symptoms after sleeping in beds raised six inches at the head end.
The rationale lies with placing the brain higher above the remainder of the nervous system so that gravity assists the growth of nerve tissue. Fletcher studied American research on fish and frogs which spend their entire lives oriented in the
same way with respect to the earth. In experiments where optic nerves were severed the nerves were seen to re-grow after a period of time, restoring sight.
Case histories of human experiments in which horizontal bed rest has been replaced with the downward sloping option include one example of a woman suffering from Multiple Sclerosis who recovered her sight sufficiently to have her driving license restored and can now drive without the use of spectacles. Other examples of the efficacy of this treatment include one of a boy whose hands were permanently clenched and cold, but who can now write a little with a pen and feel warmth returning to his hands.
Fletcher suggests that nerve growth occurs around a path of circulation which is assisted by a more upright posture. A further dimension to his research which draws on the research of others is humidity. Cases of Multiple Sclerosis are apparently more common in humid environments where the lungs and body generally remain more moist. The inspiration for Fletcher's research comes partly from his days in plumbing and from the observation of trees and the manner in which they transfer fluids throughout their huge structures.
It should be stressed that no claims of total recovery are being made and the medical profession retains its customary scepticism of new 'miracle' cures.