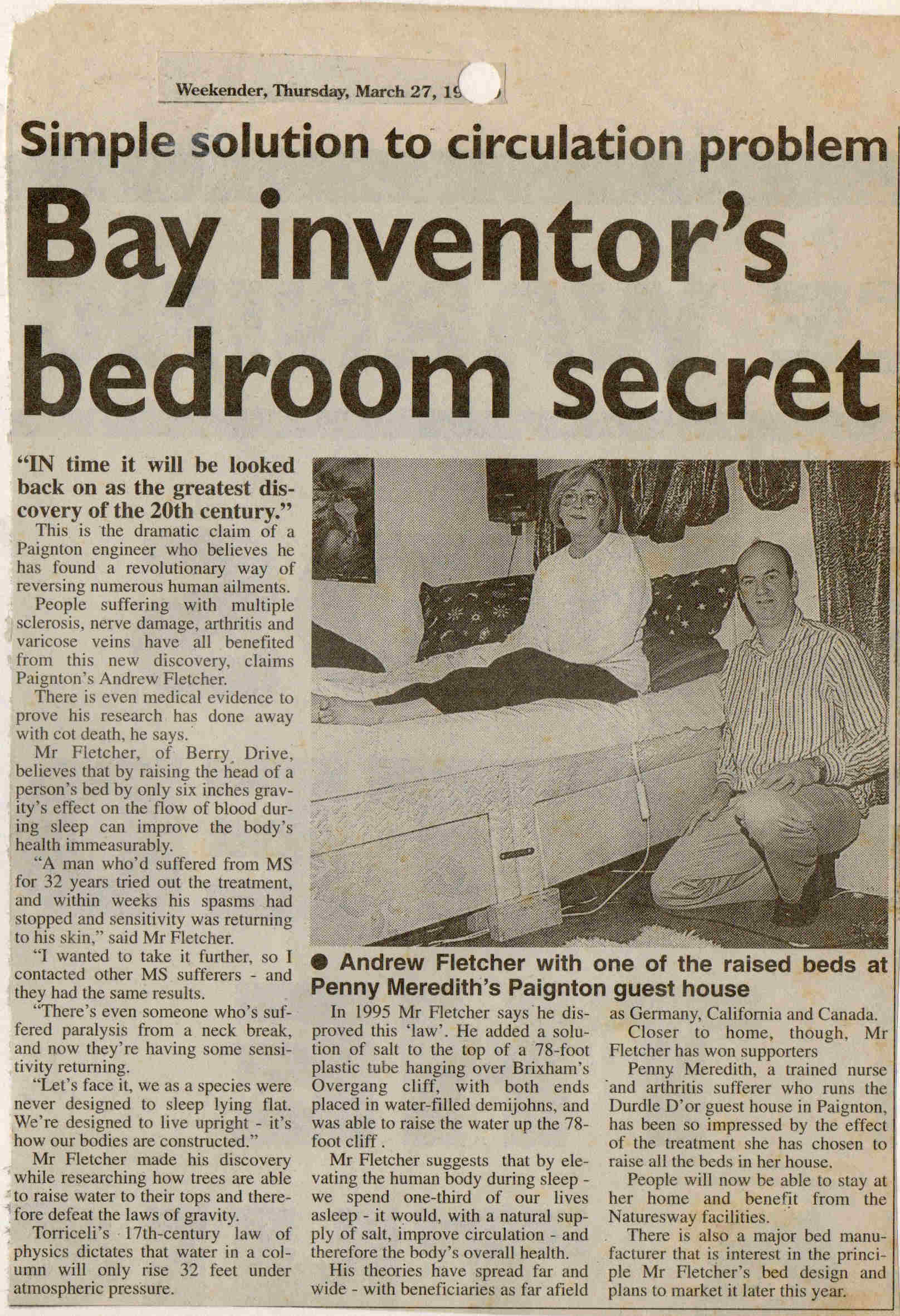 Torbay Weekender, Thursday, March 27 1996,
Simple solution to circulation problem
Bay inventor's bedroom secret
"IN time it will be looked back on as the greatest discovery of the 20th century."
This is the dramatic claim of a Paignton engineer who believes he has found a revolutionary way of reversing numerous human ailments.
People suffering with multiple sclerosis, nerve damage, arthritis and varicose veins have all benefited from this new discovery, claims Paignton's Andrew Fletcher.
There is even medical evidence to prove his research has done away with cot death, he says.
Mr Fletcher, of Berry Drive, believes that by raising the head of a person's bed by only six inches gravity's effect on the flow of blood during sleep can improve the body's health immeasurably.
"A man who'd suffered from MS for 32 years tried out the treatment, and within weeks his spasms had stopped and sensitivity was returning to his skin," said Mr Fletcher.
"I wanted to take it further, so I contacted other MS sufferers - and they had the same results.
"There's even someone who's suffered paralysis from a neck break, and now they're having some sensitivity returning.
"Let's face it, we as a species were never designed to sleep lying flat. We're designed to live upright - it's how our bodies are constructed."
Mr Fletcher made his discovery while researching how trees are able to raise water to their tops and therefore defeat the laws of gravity.
Torriceli's 17th-century law of physics dictates that water in a column will only rise 32 feet under atmospheric pressure.
Penny Meredith's Paignton
In 1995 Mr Fletcher says he disproved this 'law'. He added a solution of salt to the top of a 78-foot plastic tube hanging over Brixham's Overgang cliff, with both ends placed in water-filled demijohns, and was able to raise the water up the 78-foot cliff.
Mr Fletcher suggests that by elevating the human body during sleep -we spend one-third of our lives asleep - it would, with a natural supply of salt, improve circulation - and therefore the body's overall health.
His theories have spread far and wide - with beneficiaries as far afield as Germany, California and Canada.
Closer to home, though, Mr Fletcher has won supporters: Penny Meredith, a trained nurse and arthritis sufferer who runs (he Durdle D'or guest house in Paignton, has been so impressed by the effect of the treatment she has chosen to raise all the beds in her house.
People will now be able to stay at her home and benefit from the Naturesway facilities.
There is also a major bed manufacturer that is interest in the principle Mr Fletcher's bed design and plans to market it later this year.
Pictured: Andrew Fletcher and Penny Meredith with one of the raised beds at Penny's guest house