Tilt Your Bed For A Really Healing Sleep 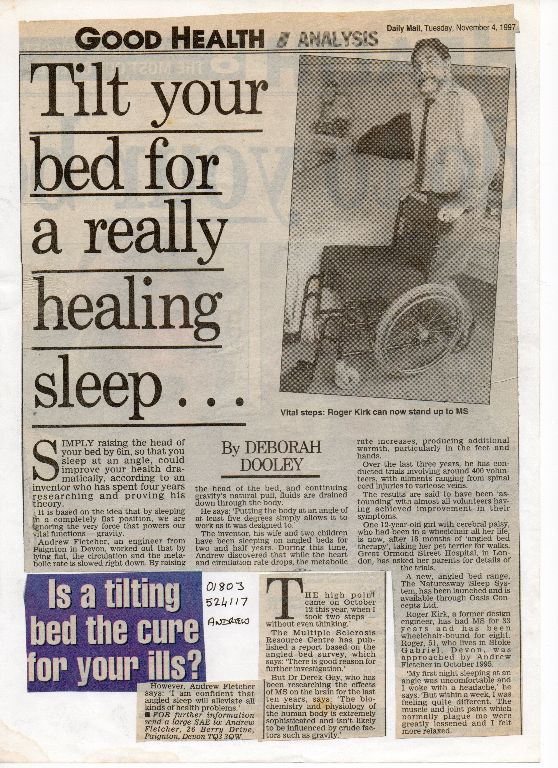 Vital steps: Roger Kirk can now stand up to MS

SIMPLY raising the head of your bed by Gin, so that you sleep at an angle, could improve your health dramatically, according to an inventor who has spent four years researching and proving his theory.
It is based on the idea that by sleeping in a completely flat position, we are Ignoring the very force that powers our vital functions — gravity.
Andrew Fletcher, an engineer from Paignton in Devon, worked out that by lying flat, the circulation and the metabolic rate is slowed right down. By raising the head of the bed, and continuing gravity's natural pull, fluids are drained down through the body.

He says: 'Putting the body at an angle of at least five degrees simply allows it to work as it was designed to.'
The inventor, his wife and two children have been sleeping on angled beds for two and half years. During this time, Andrew discovered that while the heart and circulation rate drops, the metabolic rate increases, producing additional warmth, particularly in the feet and hands.

Over the last three years, he has conducted trials involving around 400 volunteers, with ailments ranging from spinal cord injuries to varicose veins. The results are said to have been 'astounding' with almost all volunteers having achieved improvement in their symptoms.
One 12-year-old girl with cerebral palsy, who had been in a wheelchair all her life, is now, after 18 months of 'angled bed therapy', taking her pet terrier for walks. Great Ormond Street Hospital, in London, has asked her parents for details of the trials.

However, Andrew Fletcher says: 'I am confident that angled sleep will alleviate all kinds of health problems.' •

The high point came on October 12 this year, when I took two steps — without even thinking.'
The Multiple Sclerosis Resource Centre has published a report based on the angled bed survey, which says: 'There is good reason for further investigation.' Raised Bed Survey
But Dr Derek Gay, who has been researching the effects of MS on the brain for the last ten years, says: "The biochemistry and physiology of the human body is extremely sophisticated and isn't likely to be influenced by crude factors such as gravity.'

Roger Kirk, a former design engineer, has had MS for 33 years and has been wheelchair-bound for eight. Roger, 51, who lives in Stoke Gabriel, Devon, was approached by Andrew Fletcher in October 1995.
'My first night sleeping at an angle was uncomfortable and I woke with a headache,' he says. 'But within a week, I was feeling quite different. The muscle and joint pains which normally plague me were greatly lessened and I felt more relaxed.