Humans sleep upside down. Hot air doesn't rise. Boiling water doesn't froth. Bones weaken, muscles atrophy, and an ordinary sneeze can send you flying! The list goes on and on....

Now scientists have added one more item -- a surprising and important one -- to the list of things that work oddly when the familiar feel of gravity vanishes: Sperm. Researchers have found that gravity -- either too much or too little of it -- affects the behavior of sperm in puzzling ways. 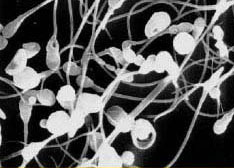 Image to right: A scanning electron micrograph of sperm on Earth. Photo courtesy of the University of Utah Andrology Microscopy

According to Joseph Tash, a NASA-supported physiologist at the University of Kansas Medical Center, sperm behave differently in the near-weightless environment of space than they do on Earth. Whether these changes will impair or aid fertility, he doesn't yet know. But, says Tash, it's becoming increasingly clear that in outer space, fertilization -- of humans, of animals, and even of plants -- will very likely be affected.

The puzzling behavior of space-faring sperm first attracted attention in 1988 when the German researcher U. Engelmann sent samples of bull sperm into orbit aboard a European Space Agency rocket. His goal, in that and a later experiment, was merely to determine whether changes in gravity affected the motility (movement) of sperm. He found that it did. The tiny cells appeared to move better in a low gravity environment -- good news, it seemed, for fertilization, which is closely tied to sperm motility. Perhaps making babies would actually be easier in space!

But, says Tash, who has studied the sperm of sea urchins on board NASA shuttle flights, it's not so simple.

Sperm movement, he explains, begins with a process called phosphorylation -- a chemical reaction widely used by cells to control their own activities. In phosphorylation, an enzyme changes the functioning of a protein within a cell. This sets off a kind of domino chain reaction that starts some type of activity -- like causing the tails of sperm to move, and to propel the sperm cell forward. On Earth, the tail movement is halted or modified when a second enzyme, known as a protein phosphatase, kicks in.

In microgravity, Tash found that the second enzymes don't do their job within the normal time period.

Although his results may explain why sperm move faster in space, they don't necessarily imply that fertilization will be easier. After all, if one enzyme (protein phosphatase) isn't activated properly perhaps others will be affected, too. Many enzyme reactions play a role in the fertilization process: for example, to ready the sperm to insert the DNA into the egg. Says Tash: if enzyme processes are being altered by gravity -- and they are -- you can't even guess at the effect on fertilization until you've studied more than just sperm movement.

Tash conducted his initial research using the European Space Agency's Biorack Facility on board shuttle missions STS-81 and STS-84. "Those were part of the MIR docking flights," he explains, "and there was no room for microscopes. Although we wanted to, we could not actually look at the sperm motility itself." As it turned out, doing without microscopes led to unexpected benefits. They were forced to concentrate instead on the proteins that are connected with the process. "As a result," says Tash, "we were able to identify [previously-unknown] proteins in the sperm tail that are very tightly coupled to the initiation of sperm movement."

More recently, Tash has studied the effects on sperm of hypergravity (greater than normal gravity). Working with a centrifuging microscope in Germany, he was able to examine activated sea urchin sperm under conditions up to 5 G (five times normal Earth gravity). His findings expanded on the results of the shuttle experiments.

On the shuttle, Tash explained, researchers examined the proteins by activating millions of immotile sperm and then, using antibodies, looking at the way the proteins had changed 30 and 60 seconds later. With the centrifuging microscope, "we were actually taking measurements of individual sperm cells." Following each of the unique wrigglings of hundreds of individual sperm, Tash found that sperm motility begins to deteriorate at as little as 1.3 Gs. And, he found, in hypergravity fertilization itself is reduced by a full 50%. As in microgravity these effects seem to be driven by changes in phosphorylation.

It's actually astonishing that something as tiny as sperm could be affected by gravity. Physicists, says Tash, "might argue that the size of molecules critical to sperm movement are not big enough to be sensitive to gravity." But, he points out, the head of a sperm is about the same size as statoliths in plants -- small floating granules that help plants tell up from down. Gravity may in fact affect things that are even smaller. Researchers, says Tash, are now beginning to find evidence that even the individual proteins that form the structures of the sperm tail may be sensitive to gravity changes.

No one knows exactly how gravity affects cells. It may have to do with the cytoskeleton: the structure that gives a cell its shape. Proteins that send signals are often physically connected with the cytoskeleton, says Tash. Perhaps, he says, there is a mechanism in which the gravitational forces on the sperm head are somehow transmitted into the cytoskeleton, which then affects the signaling pathways that alter movement.

This is a puzzle humans need to solve if we plan to spend much time in space. Ultimately, our exploration of space may rely on the ability of many species to reproduce in microgravity: not only humans, but also animals and greenhouse plants.

"For NASA," says Tash, "the basic underlying question is: Do changes in gravitational force affect the ability of species to reproduce?" Increasingly, the answer seems to be yes. "It's an area," he says, "that requires a lot more attention."

Right: The sperm moves by rotating its tail in a spiral motion through the water. This induces waves of force backward propelling the sperm forward. If the sperm hits a hard surface, like an egg, the spiral motion will cause the entire sperm to rotate. Image Credit - Chris Patton, Stanford

Editor's Note: Why does Tash use sea urchin sperm for his experiments? Despite the unusual source, sperm and sperm movement are universal in the animal kingdom, Tash says. Sea urchin sperm is used because there is less variation from one urchin to another than there is among humans or other mammals. Sea urchin sperm can also survive pre-launch delays better than many other species.

New evidence on the role of gravity in fertilization - NASA researchers have uncovered evidence that gravity, or the lack thereof, may play an important role in the development and evolution of life. A NASA headquarters press release.