THE MORNING SHOW with Patrick Timpone

-Andrew and Patrick invite our listeners to try inclined bed therapy and report on their experiences to us. We will have Andrew back on the show at summer's end: http://oneradionetwork.com/health/andrew-k-fletcher-phenome

The video contains an explanation of perhaps the most important discovery in circulation since science began. It begins by explaining how gravity drives the circulation in trees and plants and quickly moves on to explain how gravity has no respect for the vessel that contains this flow and return system, explaining how it fits with human circulation and how simply tilting a bed by raising it 6 inches / 15 cm  or more, higher at the head end will have a profound affect on a whole range of medical conditions curently thought to be irreversible. The literature states erroneously that gravity does not play a roll in circulation because it acts equally on the ascending and descending sides . Massive blunder.   My son suggested I send this in to you and ask you to view it. I have been working on this discovery for 20 years now helping as many people that will listen as possible. Sadly many people have been conditioned to accept the advice of doctors, who believe that everything in their manuals is irrefutable. Science however tells us that nothing is set in stone and progress happens in the most unlikely corners.
Listen to the Programme Here: 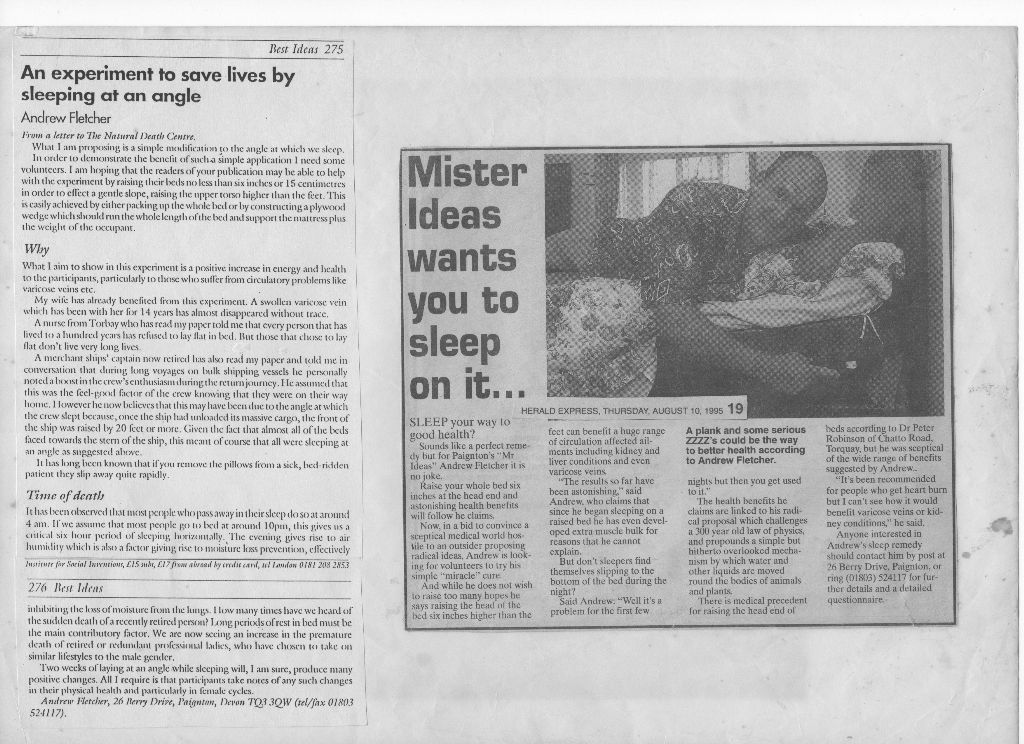 An experiment to save lives by sleeping at an angle

from a letter to 'Ibc Natural Death Centre,

What I am proposing is a simple modification to the angle at which we sleep.
In order to demonstrate the benefit of such a simple application I need some volunteers. I am hoping that the readers of your publication may be able to help with the experiment by raising their beds no less than six inches or 15 centimetres in order to aff'ect a gentle slope, raising the upper torso higher than the feet. This is easily achieved by either packing up the whole bed or by constructing a plywood wedge which should run the whole length of the bed and support the mattress plus the weight of the occupant.
Why?
What I aim to show in this experiment is a positive increase in energy and health to the participants, particularly to those who suffer from circulatory problems like varicose veins etc.
My wife has already benefited from this experiment. A swollen varicose vein which has been with her for 16 years has almost disappeared without trace.

A nurse from Torbay who has read my paper told me that every person that has lived to a hundred years has refused to lay flat in bed. But those that chose to lay flat don't live very long lives.

A merchant ships' captain now retired has also read my paper and told me in conversation that during long voyages on bulk shipping vessels he personally noted a boost in the crew's enthusiasm during the return journey. He assumed that this was the feel-good factor of the crew knowing that they were on their way home. However he now believes that this may have been due to the angle at which the crew slept because, once the ship had unloaded its massive cargo, the front of the ship was raised by 20 feet or more. Given the fact that almost all of the beds faced towards the stern of the ship, this meant of course that all were sleeping at an angle as suggested above.

It has long been known that if you remove the pillows from a sick, bed-ridden patient they slip away quite rapidly.
Time of death
It has been observed that most people who pass away in their sleep do so at around 4 am. If we assume that most people go to bed at around 10pm, this gives us a critical six hour period of sleeping horizontally. The evening gives rise to high air humidity which is also a factor giving rise to moisture loss prevention, effectively inhibiting the loss of moisture from the lungs. How many times have we heard of the sudden death of a recently retired person? Long periods of rest in bed must be the main contributory factor. We are now seeing an increase in the premature deaths of retired or redundant professional ladies, who have chosen to take on similar lifestyles to the male gender.
Two weeks of laying at an angle While sleeping will, I am sure, produce many positive changes. All I require is that participants take notes of any such changes in their physical health and particularly in female cycles.
Andrew Fletcher, 26 Berry Drive, Paignton, Devon

Mister Ideas wants you to sleep on it...

HERALD EXPRESS, THURSDAY, AUGUST 10, 1995
SLEEP your way to good health?
Sounds like a perfect remedy but for Paignton's "Mr Ideas" Andrew Fletcher it is no joke.
Raise your whole bed six inches at the head end and astonishing health benefits will follow he claims.
Now, in a bid to convince a sceptical medical world hostile to an outsider proposing radical ideas, Andrew is looking for volunteers to try his simple "miracle" cure.
And while he does not wish to raise too many hopes he says raising the head of the bed six inches higher than the

feet can benefit a huge range of circulation affected ailments including kidney and liver conditions and even varicose veins.
"The results so far have been astonishing," said Andrew, who claims that since he began sleeping on a raised bed he has even developed extra muscle bulk for reasons that he cannot explain.
But don't sleepers find themselves slipping to the bottom of the bed during the night?
Said Andrew: "Well it's a problem for the first few
A plank and some serious ZZZZ's could be the way to better health according to Andrew Fletcher.
nights but then you get used toil."
The health benefits he claims are linked to his radical proposal which challenges a 300 year old law of physics, and propounds a simple but hitherto overlooked mechanism by which water and other liquids are moved round the bodies of animals and plants.
There is medical precedent for raising the head end of
beds according to Dr Peter Robinson of Chatto Road, Torquay, but he was sceptical of the wide range of benefits suggested by Andrew..
"It's been recommended for people who get heart burn but I can't see how it would benefit varicose veins or kidney conditions," he said.
Anyone interested in Andrew's sleep remedy should contact him by post at 26 Berry Drive, Paignton, or ring (01803) 524117 for further details and a detailed questionnaire.