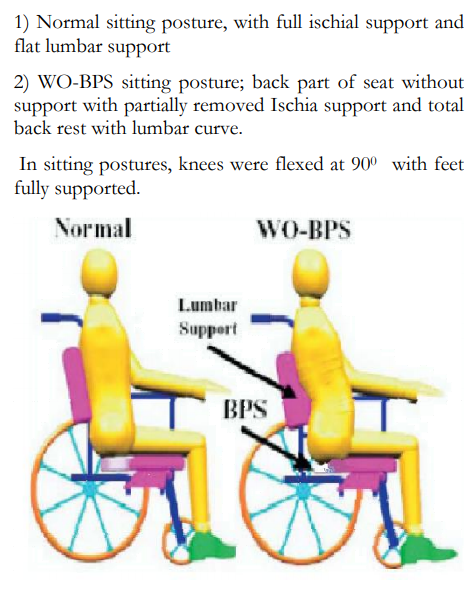 "DISCUSSION We evaluated the biomechanical effects on the LC-EF of different sitting postures on the LC-EF. Results show that posture significantly influenced spirometric parameters in tested subjects. The flow-volume loop is widely used in clinical practice to assess lung function for the condition of airways and the strength of the respiratory muscles.

The PEF reflects and measures the rate of flow from the large airways; it is also affected by the strength of the thoracic and abdominal muscles and the degree of muscular effort generated by the subject.20 The FVC is the total volume of air exhaled with maximal effort. FEF25%–75% is the flow rates at the corresponding percentage point of the FVC exhaled, and indicate the function of small or distal airways.19

The results of lumbar lordosis in this study are, in general, consistent with other published studies.22-26. In parallel with Subjects’ improved respiratory performance in the WO-BPS sitting posture over performances in the normal sitting posture. Although there is no evidence in the literature that changes in lumbar lordosis and kyphosis have significant influence on lung function, we think that these significant differences in lumbar lordosis in different postures may account for the changes in pulmonary capacity between the postures we tested.

A shape change in any one of these curvatures will cause compensatory changes in the others to help maintain balance and conserve muscular energy.27 adjustments to spinal alignment may change the volume of air available to the lung and/or influence the efficacy of contraction of the diaphragm and other respiratory muscles. Therefore, an increase in spinal lordosis in the lumbar region is likely to induce a decrease in thoracic kyphosis, thus giving the ribcage greater room to expand during inspiration.21 in this study, lumbar curve more in WO-BPS with lumbar curve than the normal sitting posture.

CONCLUSION By this study, we can say that WO-BPS with lumbar curve is better option for patients of SCI, sitting for prolong period of time because in this position improve the lung function in SCI patients than normal sitting posture. The WO-BPS with lumbar support sitting posture show significant improvement in FVC, PEFR, FEV1 and increasing values of FEF25-75% but it is not statistically significant. The following are recommendation for future study:

2. To evaluate postural change effect on lung function particular in WO-BPS with lumbar curve, over a longer period of time by full wheelchair users with SCI patients.