Sleeping Inclined To Restore and Support Your Health For Free. Fascinating Science, Discovery, History and Medical Research In Circulation And Posture, by Andrew K Fletcher

← Hover Cursor Over Cartoon To Pause

Latest From The Forum 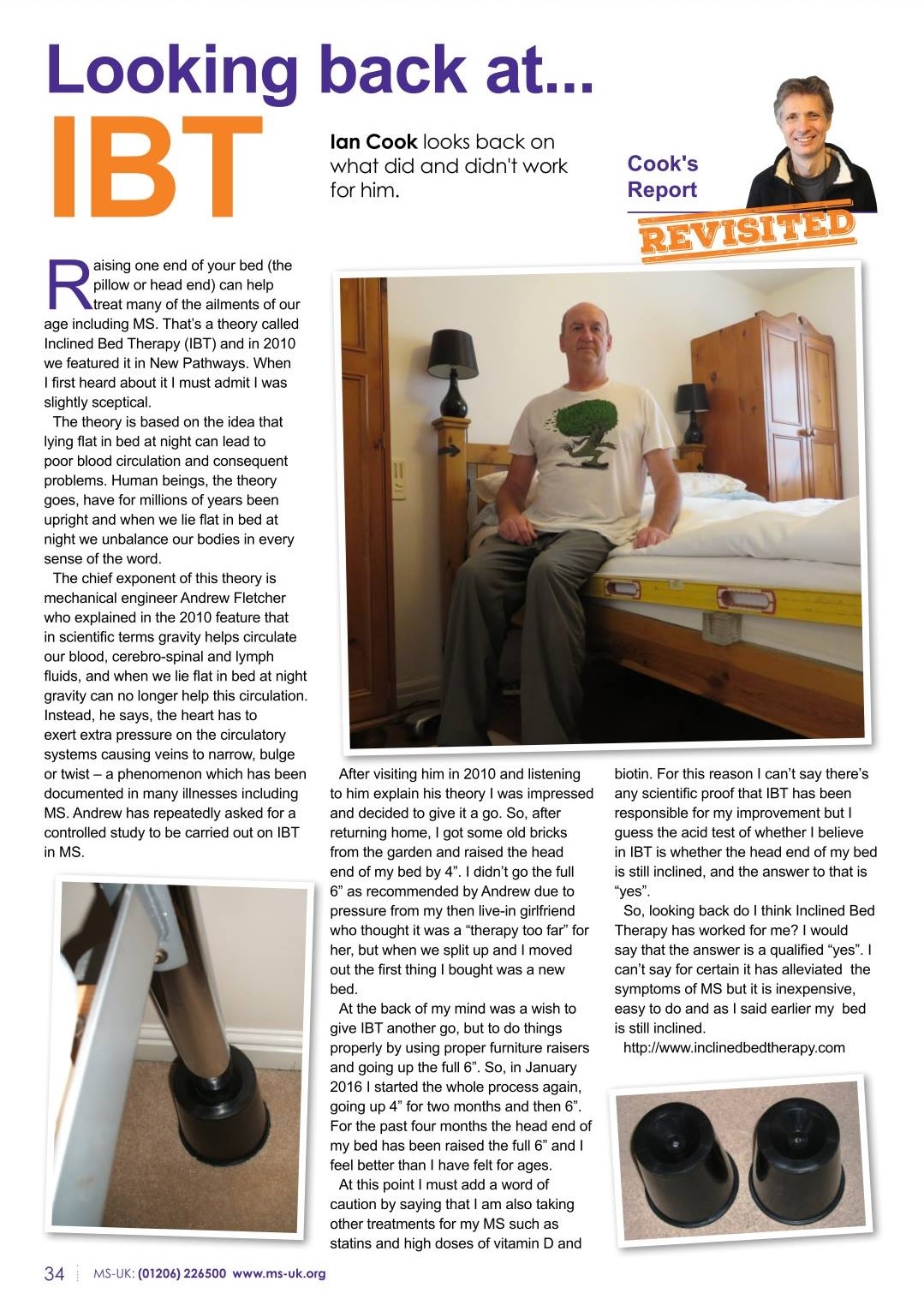 Raising one end of your bed (the pillow or head end) can help treat many of the ailments of our age including even MS. That’s a theory called Inclined Bed Therapy or IBT and in 2010 we featured it in New Pathways. When I first heard about it I must admit I was slightly sceptical.

The chief exponent of this theory is former mechanical engineer Andrew Fletcher who explained in the 2010 feature that in scientific terms gravity helps circulate our blood, cerebrospinal and lymph fluids and that when we lie flat in bed at night, gravity can no longer help our circulation. Instead the heart has to exert extra pressure on the circulatory systems causing veins to narrow, bulge or twist – a phenomenon which has been documented in many illnesses including MS.

After visiting Andrew in his Paignton home in 2010 and listening to him explain Inclined Bed Therapy I was more impressed and decided to give it a go. So, after returning home, I got some old bricks from the garden and raised the head end of my bed by 4”. I never went the full 6”as recommended by Andrew due to pressure from my then live-in girlfriend who thought it was a “therapy too far” for her, but when we split up and I moved out, the first thing I bought was a new bed

At the back of my mind was a wish to give IBT another go, but to do things properly by using proper bed raisers and going up the full 6” . So, in January 2016 I started the whole process again, going up 4” for two months and then 6”. For the past four months my bed has been raised by the full 6” and I must admit to feeling better than I have felt for ages.

At this point I must add a word of caution by saying that I am also taking other treatments for my MS such as statins and high doses of vitamin D and biotin. For this reason I can’t say there’s any scientific proof that IBT has been responsible for my improvement or played any part in it, but I guess the acid test of whether I believe in IBT is whether my bed is still inclined, and the answer to that is “yes” - it is still on the furniture raisers. (see pictures)

So, looking back do I think Inclined Bed Therapy has worked for me? I would say that the answer is a qualified “yes”. I can’t say for certain it has alleviated the symptoms of MS but it is inexpensive, easy to do and as I said earlier my bed is still inclined.
Andrew has repeatedly asked for a controled study to be conducted for people with ms.  http://www.ms-uk.org/newpathways

PS It's easy to determine whether the bed is helping or not, simply return back to sleeping flat :)