The effects of defying gravity. Sadhu Amar Bharati Raised his arm for over 40 years. Now it's withered and useless.

When the plaster cast was removed, he suffered no atrophication in his muscles and the surgeon said; "In the whole of my Career, I have never seen bone growth like this.

I then explained to him about sleeping on an inclined bed and altering his sling so that his arm hung in a downward angle, eventually removing the sling altogether and allowing Jimmy's arm to dangle down.

Imagine how many hours that this could save our National Health Service.
Jimmy's injury lead me to research what happens when you do the opposite for a long time and this is where I became interested in the man who permanently raised an arm. 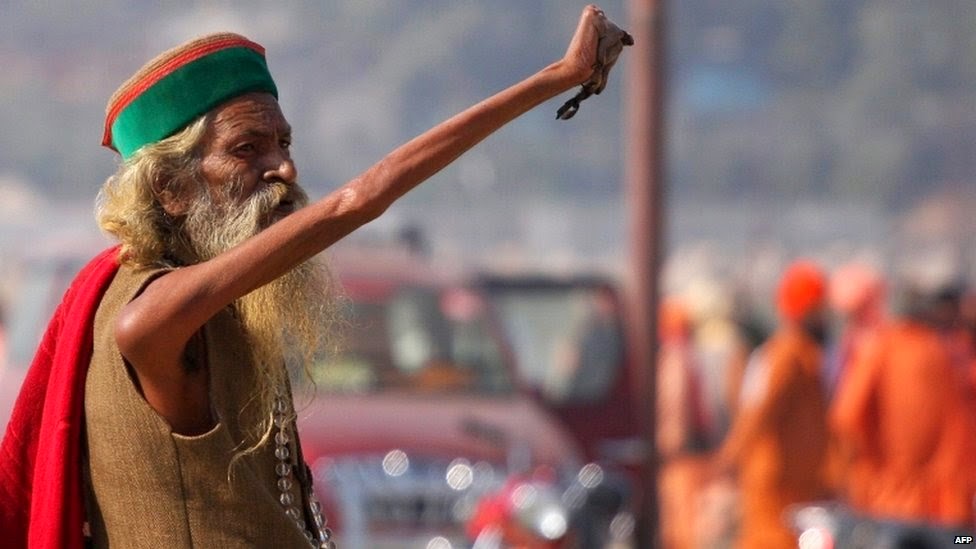 In 1970, Sadhu Amar Bharati Urdhavaahu, abandoned his traditional comfortable lifestyle and decided to completely devote himself to his Hindu  Shiva religious beliefs. After 3 years, he decided to raise his arm to the heavens in a permanent salute to his belief and he states that he did this for World Peace. Amar on that day raised his right arm and despite the initial extremely painful degenerating effects on his limb and circulation, there it has remained, withered and useless for everyone to see. 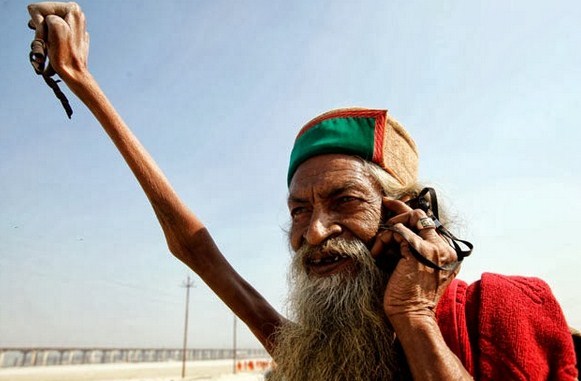 "Pehle dard hota thaa, ab aadat ho gayi hai (It used to be painful, I have become used to it now)," he says

If we raise our arm long enough, we will at first get pain, the limb will become cold and tingling. Eventually becoming numb, with fingers not working very well.

For over 21 years, I have been researching the effects of gravity upon our circulation after discovering how trees and plants harness it to raise water to impressive heights without any need for a pump. In 1995 I caused water to flow vertically up a cliff face in the UK in a 48 metre single open ended water filled tube raised by the centre in an inverted U shape with both open ends in two bottles filled with water. A small amount of coloured salt solution was added to the centre of the tube, which caused water to flow out of one side, while drawing up clean water on the other side. Gravity was sufficient to raise water 24 metres vertically. https://youtu.be/u7sBFqHmlx8

But this was just the starting point. It was not long before I realised that gravity was very important to ourselves and our own circulation.

To test this, I questioned why we decided sleeping on a flat bed was good for us and more to the point, decided to ignore this habitual and now nonsensical approach to sleeping by raising the head end of a bed by 6 inches / 15 cm to cause a five degree head end up incline. The incline angle was determined by observing how water in a closed loop of tubing stretched from pillow end to foot end was caused to circulate, by adding a tiny amount of coloured salt solution to the pillow end of the experiment.  This was given the name of Inclined Bed Therapy or (IBT) for short and has become my lifes work in helping people to regain their health and fitness and best of all it's completely free for all to try.

During this important and fascinating research into inclined bed therapy, people realised that if they slept with their hands by their heads or on the pillow as they would do when sleeping on a flat bed, the hand would become numb and exhibit loss of movement, which of course recovered when moved back down to the inclined position, which to me proved the point that gravity was indeed responsible for maintaining and driving our circulation. Of course one could argue that the heart is responsible and yet this experiment proved otherwise. After all, what drives the heart? one could postulate.

Amar wanted to show his devotion to his religion in a unique way that would also disconnect him from worldly luxuries. He decided to raise his right hand to the sky and keep it there, indefinitely.

He’s also told journalists that he intends the act to be a protest for world peace, from neighbourhood to neighbourhood and around the world.

As expected, Amar experienced the typical numbness and tingling that we all feel when a limb “falls asleep.” Even when the tingling turned to extreme pain, Amar endured and watched his arm and hand wither to become useless. After a certain amount of time, he claims the pain subsided and now the arm stands erect, seemingly on its own, reminding me of the mantra "Power to the people" Alas, his protest demonstrated that the power we seek depends on gravity!

His right arm muscles have clearly atrophied (perished) Something we don't usually see in healthy people. Yet astronauts in space exhibit very similar atrophication of muscles and heart, and decalcification of bones, in fact according to Dr Joan Vernikos, former head of NASA Life Sciences, being in space ages our body 10 times faster than it does back here on Earth. Astronauts are unable to walk without assistance on return from orbiting in the space station.

In fact, history reveals that beds were not always flat and animals afforded a choice in the wild often choose to rest and sleep inclined.
Amar isn’t alone with his permanent salute to Shiva. He he is now followed by others who also have raised a hand in the air. Some who have held their hands high for over 10 years and suffered the same misfortune.