Further to my last correspondence I am delighted to inform you of the following observations, which are recorded by people who have simply raised the angle in which they sleep by six inches at the head end of their beds.

Osteoporosis
Lady aged 66 * symptoms severe loss of movement in spine, unable to move, lethargy, and considerable pain, insomnia, and feeling cold in bed. The lady recently visited my home to tell me of her complete recovery which she says
is a miracle, she wishes to make her recovery public. Her spouse who is 67 * symptoms problems with water-works, testicular pains, large weeping scar on left arm since he was ten which needs constant attention due to
rawness and weeping, aches and pains attributed to his age. •j; also has made a full recovery and feels ten years younger, his scar has developed new healthy skin and no longer requires attention. He also says its a miracle and wishes it to be made public.

Lady who was told of the observation on scar tissue informed me that a facial scar which has remained raised and visible since she was six has now almost vanished and was visible when she started the experiment. She has gained a half inch in height which suggests her spine has somehow straitened. My own scar on my right leg is now less visible.

A lady has informed me of an overall improvement of Peripheral vestibular disorder of the inner ear which affected her balance, and aches and pains in her spine. Her mother suffers from osteoporosis and told her that the problems in her spine were the same for her when she was told that she had the illness.

MS A middle aged male is showing signs of improvement from MS, His therapist at Torbay Hospital has commented that his upper body strength has improved to a point that he can now hold his upper torso erect. He can stand in a frame and drink a cup of tea at the same time. His skin has changed colour and some sensation has returned to his legs, he can now distinguish between warm and cold and can feel the ground beneath his feet.

A young girl in Kent
has reported that her condition is improving and she feels a lot happier since she raised her bed ; early days yet.

My father has suffered from varicose ulcers for forty years, he had five ulcers and his skin he described as like plaster of paris. He also suffers from varicose veins and considerable pain. His ulcers have now healed, his veins are deflating and when his skin peels off now he has new healthy skin forming. All pain has gone.

The heart
A friend who has an artificial valve in his heart, noticed that his feet and hands have returned to a normal colour but even more astonishing he noticed that when he lays horizontally his heart beat becomes irregular. Yet when he lays at an angle his heart beat becomes stable and appears to be getting stronger. These are just a few examples but clearly indicate dramatic physiological changes.
With kind regards  Andrew K Fletcher       /

A case which again is not directly linked, but relevant is that of Marion Carrol which was shown on BBC's Strange But True. Marion was suffering from an advanced stage of MS showing all of the symptoms for the advanced stages of this illness. Marion visited the Blessing of The Sick at Knock which is said to be the place of miracles in Ireland.
Knock is geographically elevated, and therefore relatively less humid than a lowland area or river valley. On her return from Knock Marion actually rose from the stretcher and walked and has now made a full recovery with no aches or pains in the last six years. Her GP believes that a miracle has occurred in Knock and Dr Diardmuid Murray (Knock Medical Bureau) is employed to try to give a medical explanation as to why this event could have occurred
. The Stretcher Which Marion was strapped to for a considerable length of time ,measured in days, Was elevated to an almost sitting position with a further inclusion of a sloping position for her legs. This meant that she was in a similar position to the lady mentioned earlier who recovered from the liver disorder.

Comment
I Believe that the combination of prolonged resting position, altitude, and reduction in humidity, was responsible for Marion's recovery and not the divine intervention at present is the accepted explanation, however the very fact that Marion spent the time in on the stretcher was a direct "result of her visiting the shrine and therefore the whole picture could be attributed to her visit to Knock.

Subject : Other observations
I have observed a general overall improvement of health in all who have taken pert in this experiment so far. Mainly in our ability to fight infections, colds & influenza. This must surely be attributed to a boosted metabolic rate. With the above comment in mind I would like to draw your attention to a recent program on AIDS in Africa. A group of people who appear to have immunity to the disease are being examined to try to determine why they have not been infected by the disease which in some cases has wiped out whole villages, including their immediate family. The interest in this group of people stems from their profession which is prostitution . Prostitution in what is now described as the AIDS Capital of The World is surely the most dangerous profession in the World. Yet these people do not get AIDS or HIV. Why not ?

What do we do while a prostitute is actively occupied by the nature of her profession, answer : We sleep. In addition to the fact that a prostitute in a developing country will probably have at least one child to look after during the daylight hours, it can be safely assumed that this group of people are less likely to spend a long time laying horizontal.

Is Sleeping Flat A Natural Process adopted by other species or are humans doing something different ?
If one gives a dog some bedding they proceed to gather it up under their chest which effectively raises the position of sleep. In the wild dogs dig out an earth which has sloping sides again facilitating an angled sleep.

Cows and sheep given a choice will always sleep on an angle facing uphill. I have recently visited Snowdonia National Park. During my journey I noticed that entire flocks of sheep were sleeping with their heads facing uphill despite the fact that there was ample level ground in the field. The same observations were made with cattle Alligators and crocodiles sleep facing up the river bank and I now believe that their position in relation to the direction of gravity facilitates an increase in metabolism.

The giraffe don't / can't sleep flat and spend most of their time on the hoof, fish, birds, lizards, frogs, toads and most mammals do not sleep flat when allowed choice. Even a snake raises itself before striking.

The question remains as to why humans have adopted the ritual of sleeping flat and more to the point does history tell us of a different attitude towards sleeping position ?

Experiment : To raise the angle of sleep by a minimum of six inches at the head end of the bed, which facilitates gravity running through the body from head to toe while sleeping.
Anticipated response to experiment was merely to see if any visible improvements to health could be achieved.

Subject: Varicose veins.
Three ladies who took part in the experiment reported that varicose veins on their legs had deflated and all pain from them had gone. It took four weeks to effectively deflate two out of the three conditions The third lady whose veins were considerably worse took several months to deflate.

I used a loop of soft walled tubing filled with water. A tiny amount of coloured salt water was added and the tube was then joined to create an enclosed circuit. The tubing was then elevated to lift the salt solution to the top of the tubing. The salt water represents the concentration which I believe occur as a result of the loss of moisture from the lungs and skin.
Observation
salt solution which I coloured began its journey down one side of the tube causing water to be pulled and pushed up the other side. As this occurs the downward flowing salt exerts an outward pressure on the tube. The upward flowing water of the other side exerted a visible negative pressure within causing the tube to deflate. This gives an explanation for the deflation of the varicose veins.

Participant of sixty years mentioned above as the third lady. Full Symptoms. Loss of movement in the toes and ankle of left leg, loss of sensation and severe swelling of the affected limb for over five years. Hands shaking badly when held out, and severe varicose veins. Cold feet in bed (bad circulation). Observation

Four weeks after the start date, I received a call to tell me that she could now move her toes and ankle. Her legs and feet feel warm while in bed. After four months I visited her to find that her veins had disappeared except for one which runs over her knee. The swelling had gone and the sensation had returned to her leg. But even more astonishing her hands no longer shook.

She admitted that her bed had been placed flat for a few weeks only to find that her symptoms started to reappear. Needless to say she will not be laying flat again.

Her husband who is sixty five, Symptoms : Deafness due to childhood meningitis infection, back ache, arthritis.

Observation
Five weeks into the experiment complained about pain in the ears. Went to GP who could not offer an explanation. Four months into experiment, complained about an increased level of traffic noise outside their home, particularly police sirens ? Its too early to make any comment but I am watching this reaction with interest.

Subject : Muscles
Almost all participants have recorded something happening to their muscles. In particular myself my wife and two boys ages fourteen and fifteen have observed that our muscles appear to be responding in a way that one usually attributes to weight training. More an awareness than an ache. Muscles appear to be growing and increasing in firmness.

Subject : Spine
Several participants have reported a side effect which causes an ache in the centre of the spine which gradually moves into the neck causing stiffness and finally disappears after a week or so.

Comment There is obviously some activity in the central nervous system and spine. Have now decided to include a patient with a spinal injury who lost the use of his legs after a motorcycle accident. 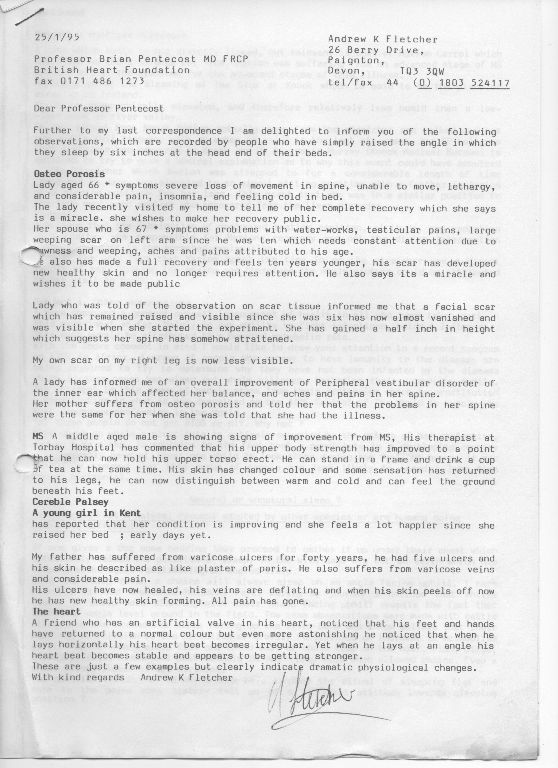 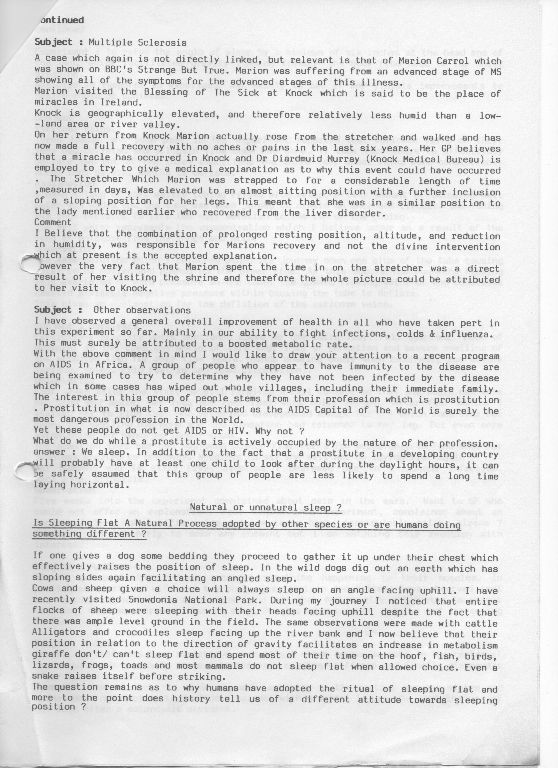 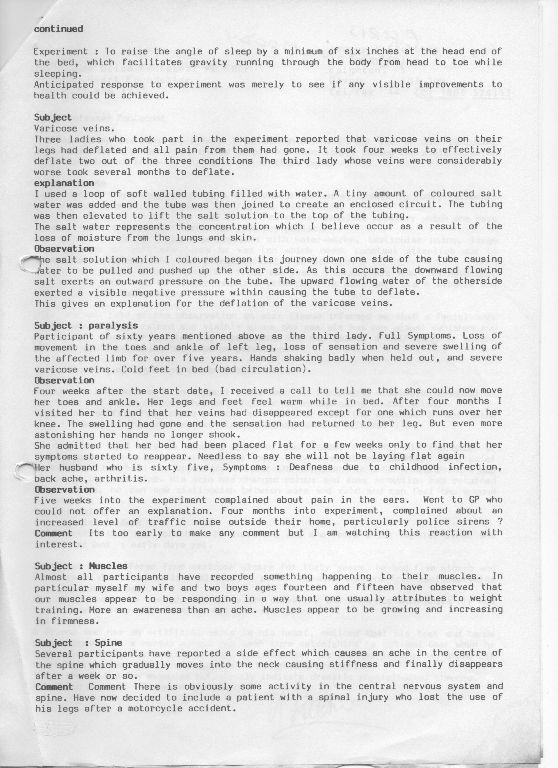